Birch class have enjoyed a super exciting week based on people who help us in the community this week. Aren the aliens planet was on fire so he had to learn all about the people we use on earth to help us when fires and bad things happen. We found out what a fireman needs to do his job properly, we even met some firemen who showed us their fire truck and let us have a go with the fire hose. This was super exciting and everyone now knows what sound to listen for if the fire engine is heading our way. We decorated our own police hats and investigated a crime scene involving a missing key and Aren the alien. We almost has a visit from the police but they had a real emergency to go to so they are going to surprise us some time soon by popping in. We loved following the clues Aren the alien had left for us and being detectives.

As part art of our Number and Shape we have been investigating the number 5. Aren has lost his keys, they are in the shape of a pentagon and children have been counting the edges and of the keys to make sure they have 5. We have also looked at 5 pointed stars and even counted 7 pointed stars. We have been combining police cars and fire engines in different ways to make 5 and counting out 5 of each to look at whether we have an equal amount in each group.

This week we discovered that Aren the Alien loves the number 4 especially when it comes to getting around his planet. We have been investigating shapes that have four sides like a diamond, rectangle and square and using these to make our own alien vehicles by placing twigs together to enclose a shape and counting out four conkers for wheels. We have also explored natural Autumn materials and some of us have enjoyed building campfires with these materials as well. We looked at the many different ways we could combine Smeds and Smoos to make four, counting out four from two groups. We also made Janet Smed a necklace and a diary of what she liked to do every day to do with four.

Our favourite book of the week has been 'The Smeds and the Smoos' and we have had a fantastic week talking about why we are all different, how amazing this is and the many ways we can be kind to others. Using our phonetic knowledge we have labelled the differences on a Smed and a Smoo, completed a cutting and sticking exercise on 'what makes a good friend' and made a poster to help us remember how we can be kind at lunch, break and in class time.

This week we have been showing Aren the Alien how we keep our bodies healthy and investigating the number 3. We started the week by making faces with fruit in the shared area and listening for the initial sounds we had learned. We then wrote a shopping list for Aren of healthy foods beginning with the phonemes we have already learned and even tasted the healthy foods, some of which we had tried before and some of which were new to us.

On Monday morning we found Arens spaceship had landed in the classroom but it was broken and could only be mended by collecting items that were representations of the number 3 or numeral 3. We really enjoyed searching the courtyard and the outside area for these on our Burn 2 Learn and taking them back to the spaceship.

Lots of us enjoyed drawing our families for Aren and labelling them with initial sounds so that he knew what a human family looks like. Some of us even drew our pets.

We really enjoyed looking for the number 3 in the environment and exploring the pyramid shape by looking at 'the louvre' in Paris. We have looked at what a safe and secure home looks like and made our own pyramids in the craft and outdoor area using tetra blocks looking at the triangle faces.

Finally we celebrated filling our class Pom Pom jar by making triangle sandwiches from jam and ham and having an Alien and teddy bears picnic, all be it a slightly soggy one in the rain. The children really enjoyed blending the words j-a-m and h-a-m while they were making their sandwiches with Mrs Sutcliffe and the teddies definitely enjoyed eating them. Many thanks to parents for helping children bring their cuddly toys to school.

This week the children have been learning all about their bodies so that they can describe a human to Aren the alien. We have read the story 'Funny Bones', pieced together our own skeleton and learned the names for different parts of the body. The children have also learnt the song 'Dem Bones' and taken inspiration from the story 'Fins Fluff and Other Stuff' to imagine what they might like their bodies to be covered in, in order to give them new skills and powers. We have also drawn round our bodies in chalk and listened for initial sounds. In Maths we have explored the number 2, measuring in non standard units using lollipop sticks to see which aliens could fit onto the spaceship. We have also measured 2 scoops with alien grit. We also made alien cakes for the bake-off with green icing and marshmallow eyes which the children enjoyed as a treat.

This week has seen the start of our wonderful adventure 'Everybody and Me'. After a fantastic couple of weeks settling in the children were surprised to find that a little alien called Aren has crash landed onto our school field. The children went up to investigate the landing spot and see what had been lost out of his spaceship. They were ever so excited to find a sleeping bag , some alien slime, a pair of shorts and T shirt and even an alien poo. We also read the book 'Fins Fluff and other stuff.' We will be exploring similarities and diffences between our friends and family and helping Aren complete challenges so he can get one step closer to getting back to his planet. 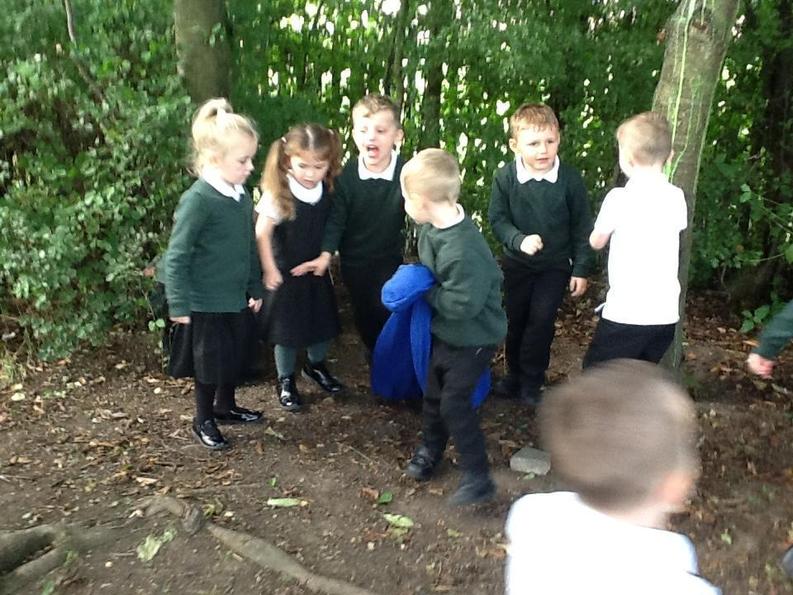 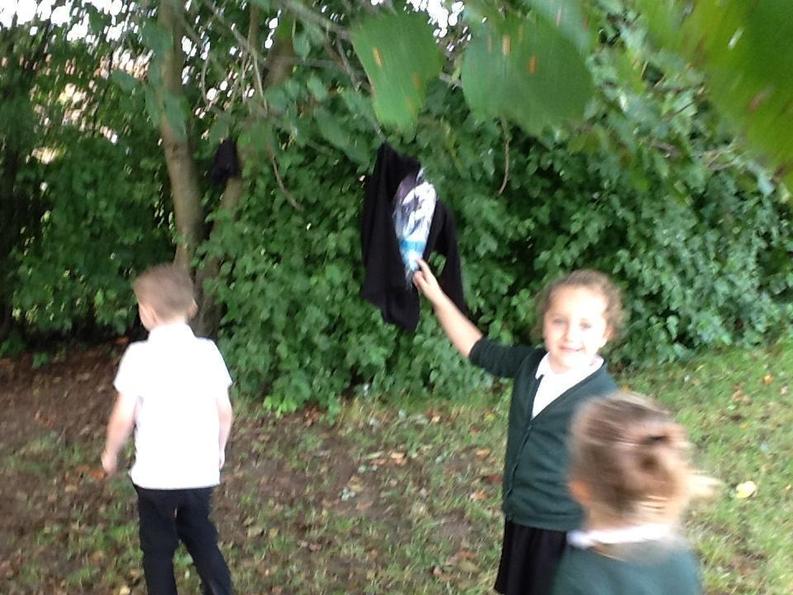 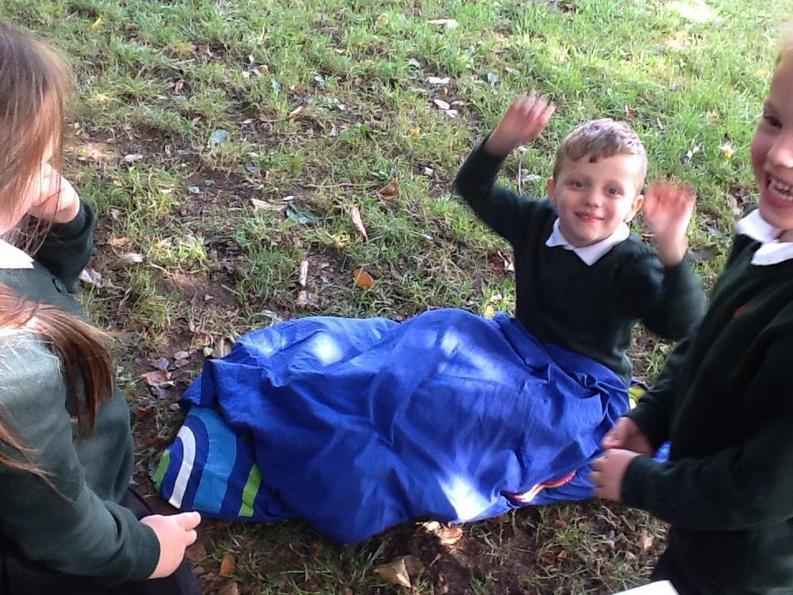 We are encouraging the children to explore who they are, what they look like and where we live. We have drawn our own aliens, making paper plate spaceships and even decorated our own planets. Some of us have also enjoyed playing in the alien slime in the water tray and decorating a friend for Aren the alien.

This week we have also been exploring the number 2 and discovered Aren had lost all his socks in the crash landing. We have been trying to pair them up so he can wear them again, understanding the concept that two things that can be a matching pair. We have also explored the numeral 2 in the environment and are continuing to explore 2 as a quantity and all the different ways 2 can be made.

Birch class have had a fantastic start to the Autumn term and have been settling in and getting to know each other over the last week. This week we have been investigating the Number 1 in a variety of ways, exploring the outdoor area, picking blackberries from our lovely mountain of brambles over the fence and cooking in the home corner. We had music with Mr Wears and sang a song about our bodies and also learnt how to sing 'Head, shoulders, knees and toes.'

Next week we are looking forward to beginning our adventure with a visit to the woods and starting to learn all about ourselves and the people around us. We will also be moving forward to investigating the number 2.

We look forward to telling our adults all about it. We will also be beginning phonics soon so look out for the green book in our book bags which can help us practise our sounds.