Autumn 1 - Changes Through the Ages

2020 certainly has been a bit of a strange year to say the least! This year will definitely go down in history and will be something which we'll all be talking about and teaching our families about in the future. That's how things change through the years - and during our first adventure in Mulberry Class, we'll be thinking about how things changed from Stone Age, Bronze Age and Iron Age and how these changes influence our life in 2020.

We came back to school after having 6 months off and decided it would be a good idea to think about what has happened this year and how we have felt about it. We wrote letters to our future self telling them all about the strange year that has been 2020. We reminded ourselves of how to use capital letters and full stops before thinking about what we had done in lockdown and how that made us feel.

The next day, Mr Cooper discovered a letter which had been left and hadn't been written in someone's book. It was ripped and didn't have a name on it. We thought it was quite bizarre what the letter was saying as none of us hunted for our own food in lockdown or lived in a cold, dingy place.
Next we found out about this field in Amesbury. We looked at where this town was in relation to Leeds and played games to remind us of the directions on a compass.
We wanted to try and find out where this letter could have come from. Mulberry classroom suddenly turned into a time machine and we travelled back to 10,000BC. The time machine kept getting stuck in different parts of history as we went back. Then, the time machine BROKE and we were STUCK in 10,000BC, in a field in Wiltshire!

After we'd imagineered, we decided to make some of our phrases and words better. We did an edit lesson where we thought of synonyms to make our writing more interesting. In the afternoon, we wrote our own diary entries about our journey back to 10,000BC!

Next, we decided to find out a little bit more about what life was like in 10,000BC at the start of the Stone Age (Palaeolithic Era). We looked at their way of life and compared it to our own.
We discovered that the person who had left us the letter had also sent us a video. That video was showing us around a house in a village in Scotland called Skara Brae. We travelled to this place to find out more about the houses. We became estate agents and in our SPAG lesson, thought about adjectives to make the houses sound amazing! We completed a Burn2Learn by thinking about whereabouts questions could go in our advert before planning and writing our own. 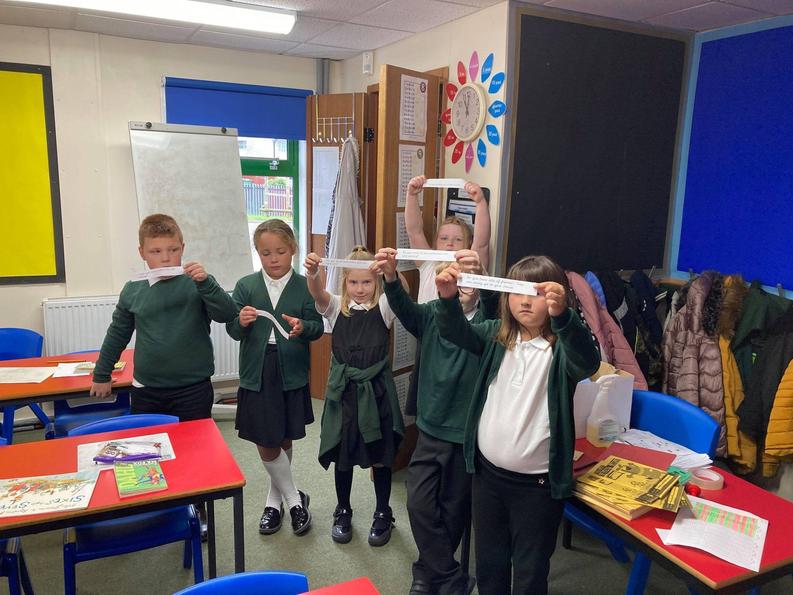 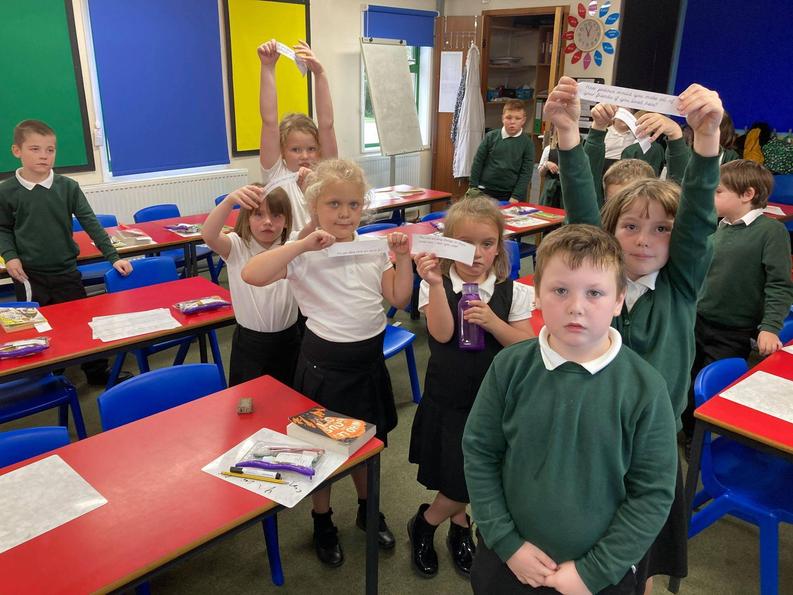 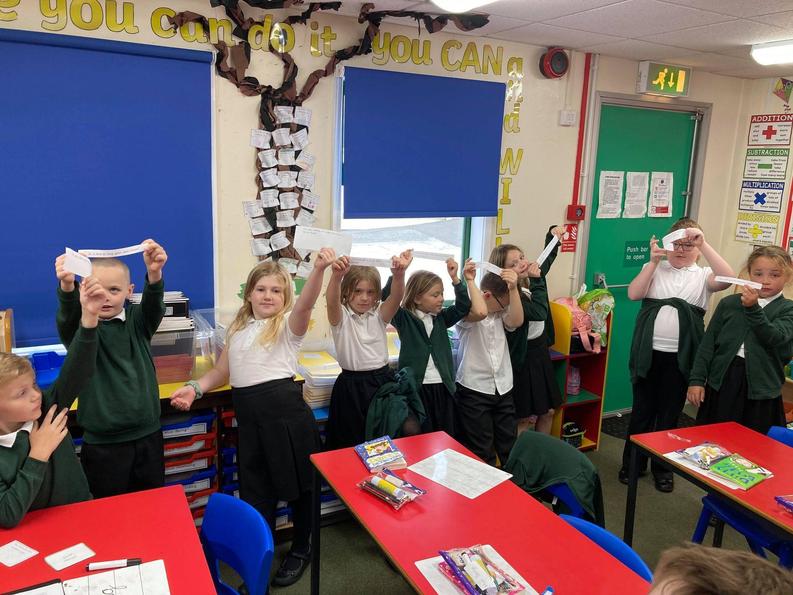 When we came in after lunch, Mr Cooper told us that the classroom had been turned into a cave over lunch by mistake and the person who had wrote us the letter and sent us the video was sending us another message to tell us something. We completed another Burn2Learn where we were inside the caves. We crawled through and realised how small and tight they were. On the ceiling and walls to the cave there were paintings. Our enquiry skills allowed us to ask questions about these paintings and find out why they were there. We then had a go at creating our own and as you can see from below, the results were pretty amazing!! 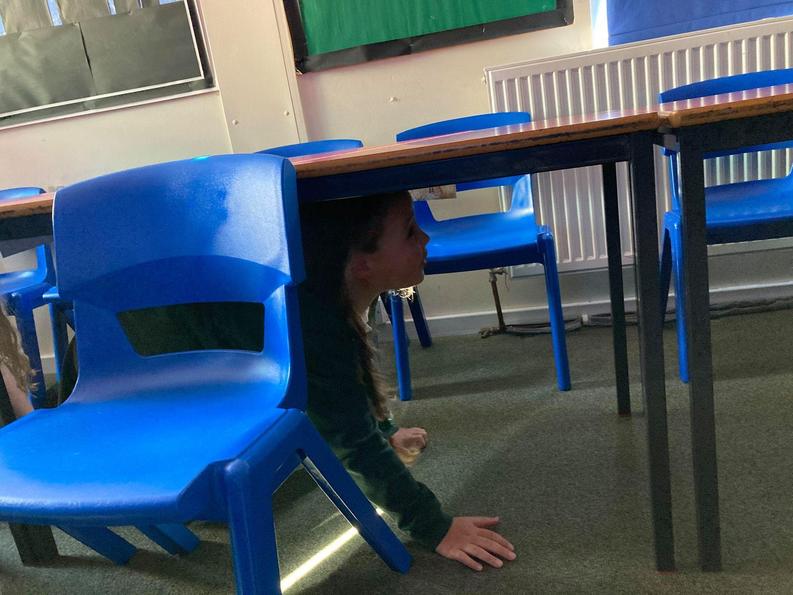 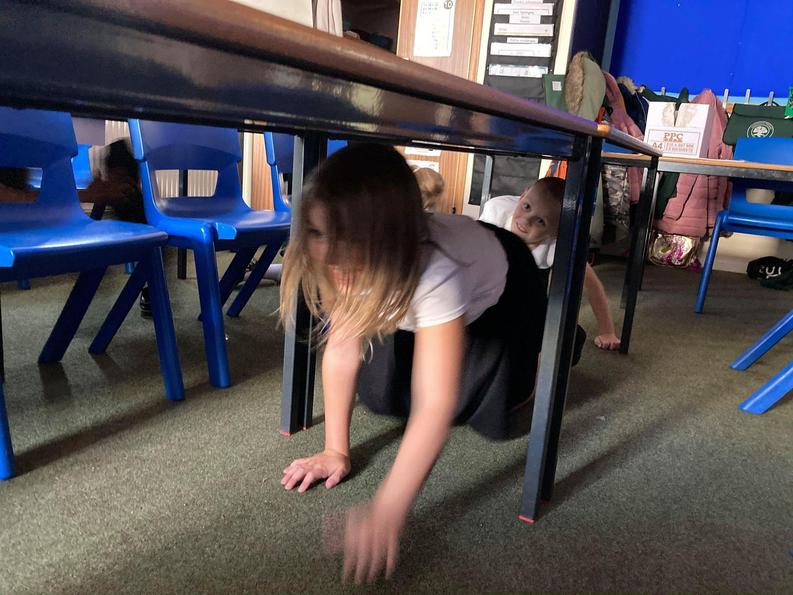 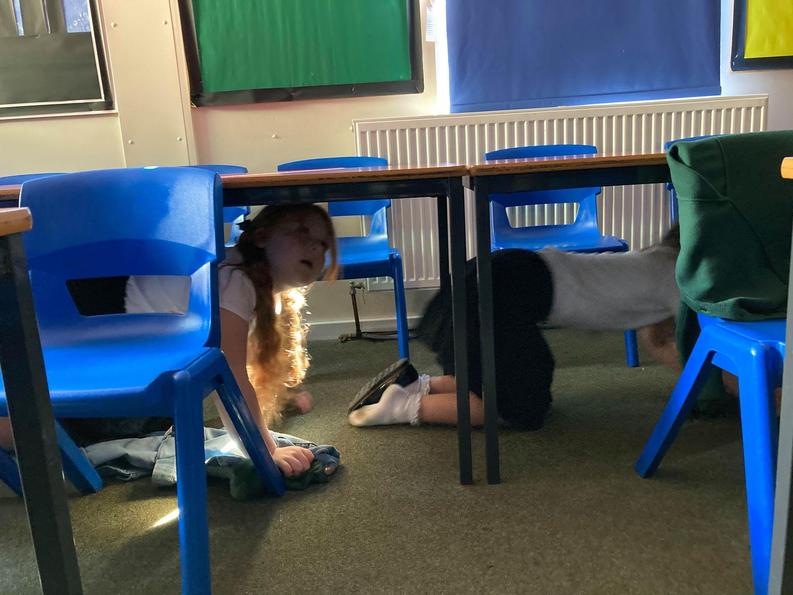 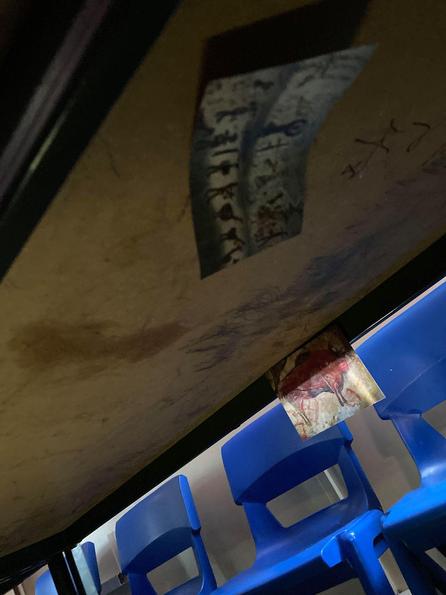 We thought about the way stories are passed down through generations. As there would have been no pen and paper in Stone Age times, we instead decided to tell our stories about our cave art to a partner as we sat around the campfire. Our partner then told our story to someone else to represent how sometimes the details of a story may change as they are passed on. 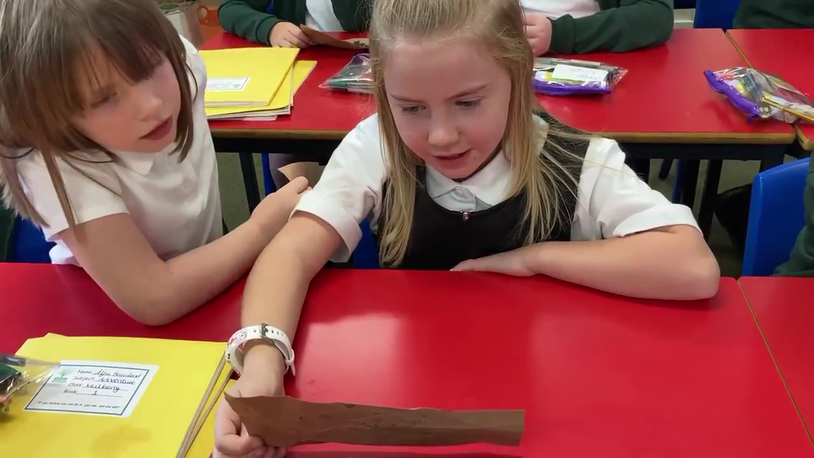 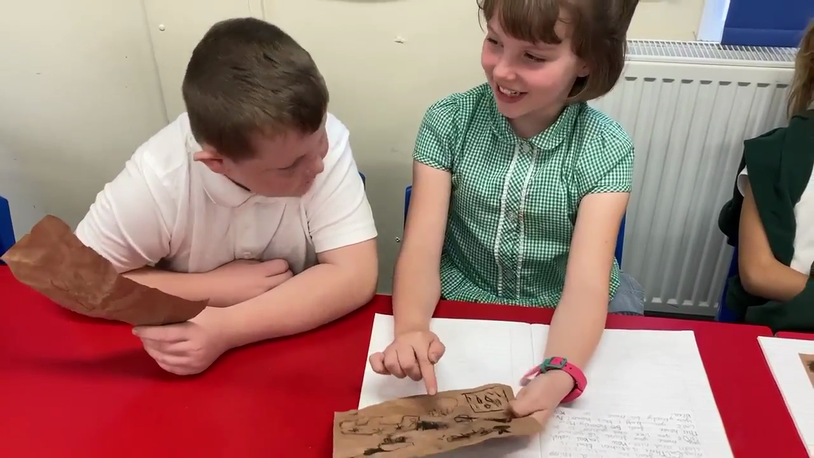 On Tuesday, we had a very exciting day in Mulberry class. We'd received this letter and video from a strange man but today, we FINALLY got to meet him!!! His name was Grugg and he was from the Stone Age. Mrs Wilson took us up onto the field whilst Mr Cooper was in a meeting. Grugg was hidden in the bushes with lots of spears. He taught us how he got his food and we became hunter-gatherers and went hunting for meat!

We woke Grugg up and he wasn’t very happy 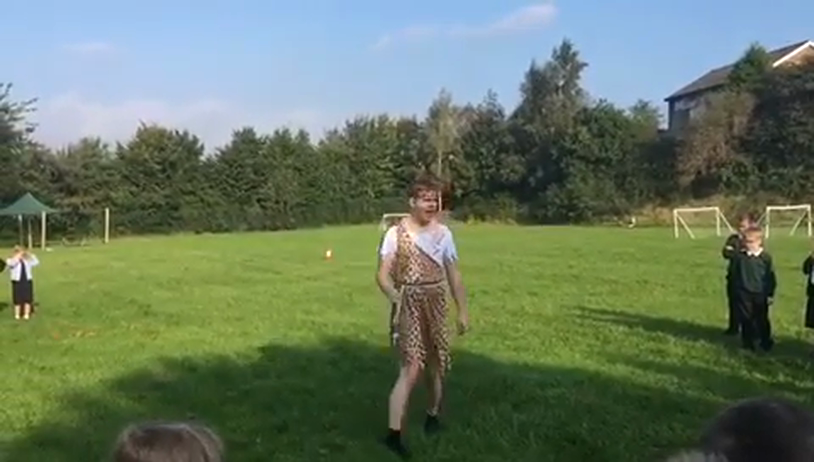 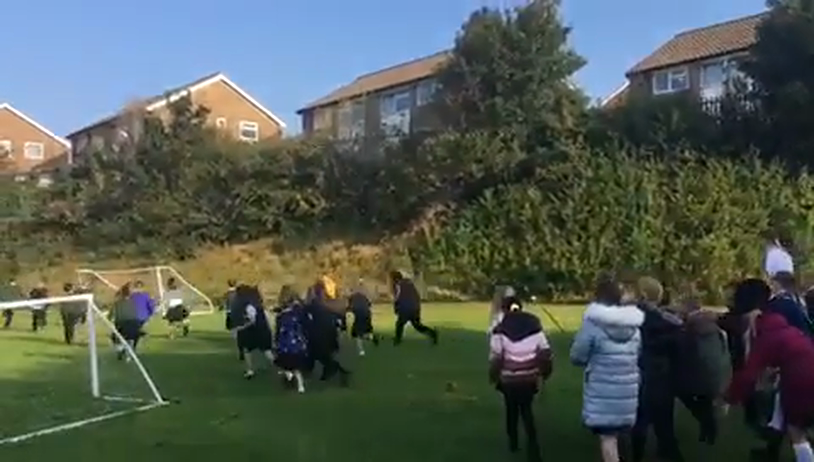 Back in class, we learnt about the role of hunter-gatherers and what they did. We then decided who was going to carry out what role to prepare our meal and we did some taste testing of Stone Age foods. 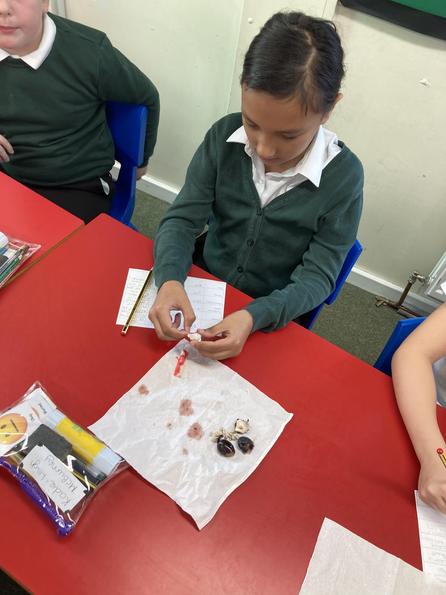 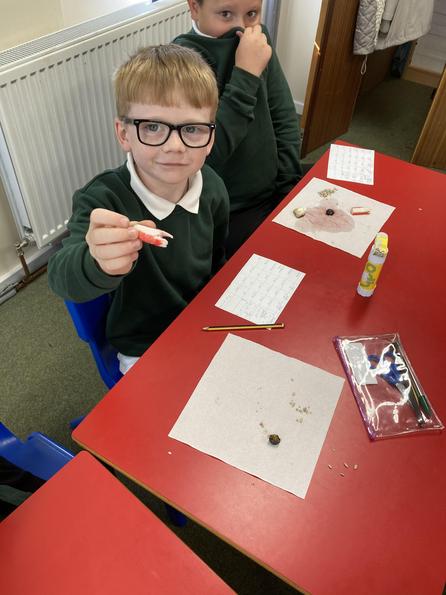 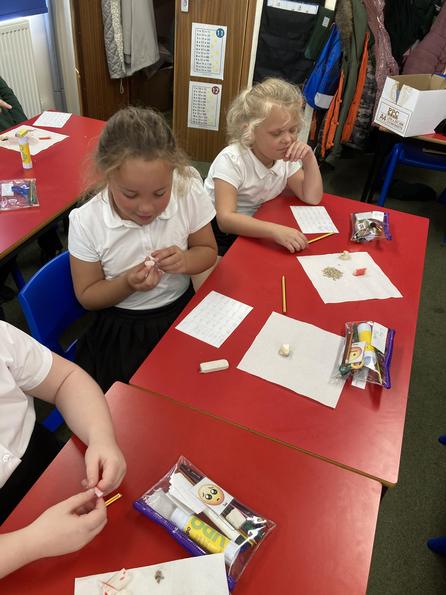 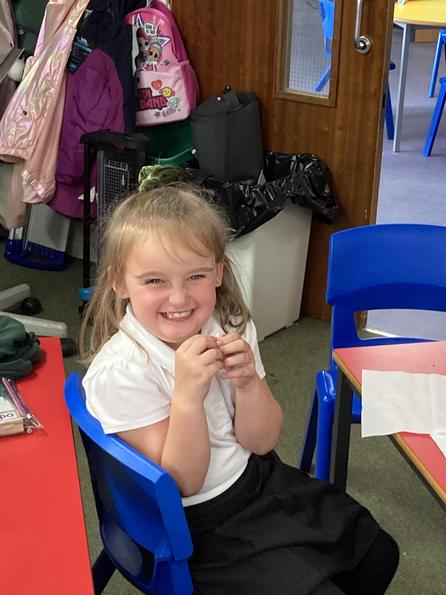 Grugg then told us that he needed our help to write a review of the food at this new restaurant in his home town. We'd sampled the food yesterday, so we got creative and thought about some brilliant descriptions to make the food sound delicious. We came up with some amazing adjectives which we then used to write our review. 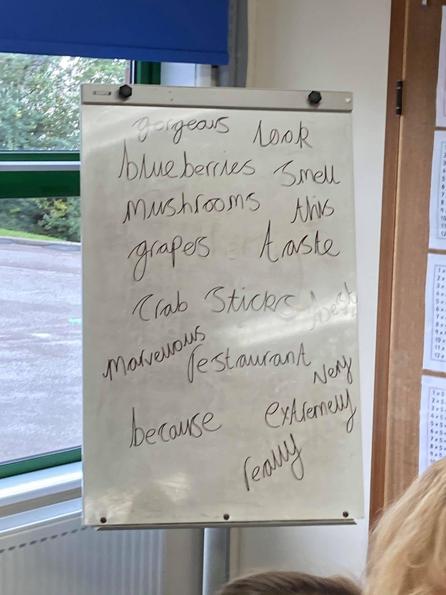 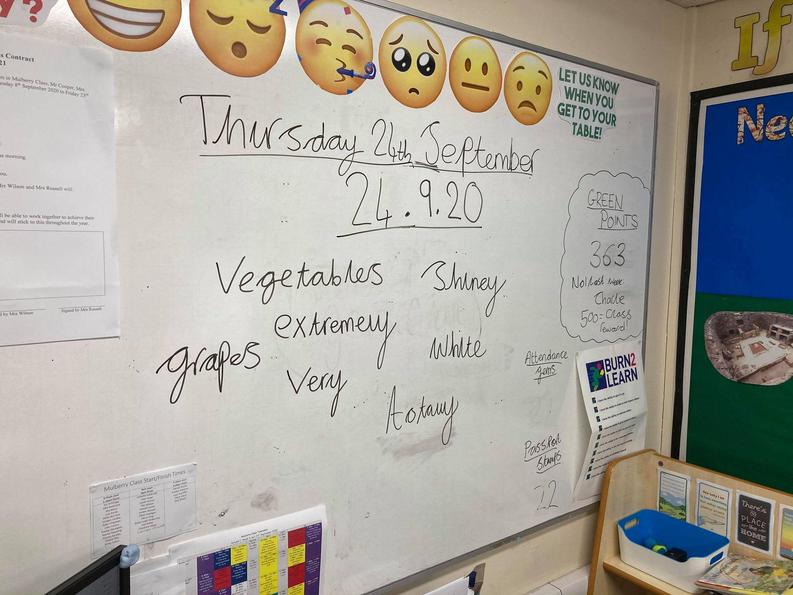 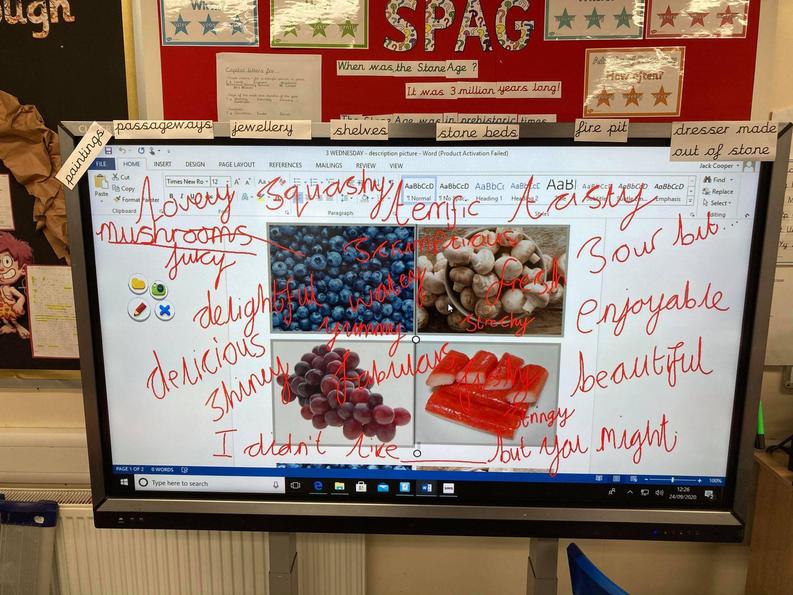 In Guided Reading this week, we have read a lovely poem called 'Journey through the Stone Age'. As we now come to the end of the Stone Age in our Adventure, we have been reflecting on the different stages of the Stone Age in this poem. We used our visualisation skills to think about a key symbol represented by the poem for each part of the Stone Age.
We made it to the end of the Stone Age - where we met the Neolithic farmers. We learnt about how their methods of getting food changed compared to the Hunter-gatherers of Grugg's time. We wrote some comparisons between the two methods of getting food before beginning to think about what came next - THE BRONZE AGE!
This week, we’ve been thinking about Stonehenge - the strange stone circle in a field in Wiltshire which took 5,000 years to build and appeared at the start of the Bronze Age. We began by identifying different subheadings and information which we could include in a report about Stonehenge. Then we matched the sub headings to the correct information and stuck it onto a sheet of paper. We then wrote our own non-chronological report about the location, how it was built and why it was significant to the Bronze Age people.

This week in Guided Reading, we’ve been thinking about Stonehenge. We’ve looked at another poem and thought about how the stones are transmitting messages. We did some drama where one person was the Stone transmitting their message about how they got there, and the other person was a journalist. We then thought of some actions which could go with each verse of the poem and some groups performed their actions to the rest of the class.

The stones are talking and telling us their story! 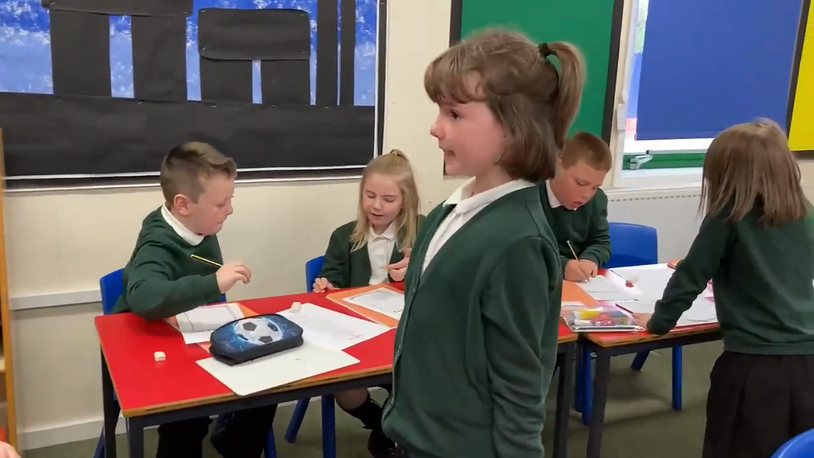 After finding out about the Bell Beaker people who lived in the Bronze Age, we then decided to make our own beakers. We shaped the clay into the beaker style shape we wanted and then used tooth picks to carefully add a design. We had to be careful to make sure we didn't go too far through the beaker otherwise it wouldn't have worked properly. In the afternoon, we wrote instructions on how to make a Bell Beaker.

As our time in the Bronze Age came to an end, Stonehenge transported us into the Iron Age - we are getting closer to 2020 (the time machine might be working again!). We landed in an Iron Age village where we saw roundhouses and hill forts. We found out about them before going to visit one.

Suddenly our hill fort was invaded!! The scene was absolute chaos and the teachers were trying to attack us. There were javelins and spears everywhere and everyone was so scared. We then wrote a diary about how it felt to be attacked and what our plan was to get our village back!

Our hill fort got invaded! 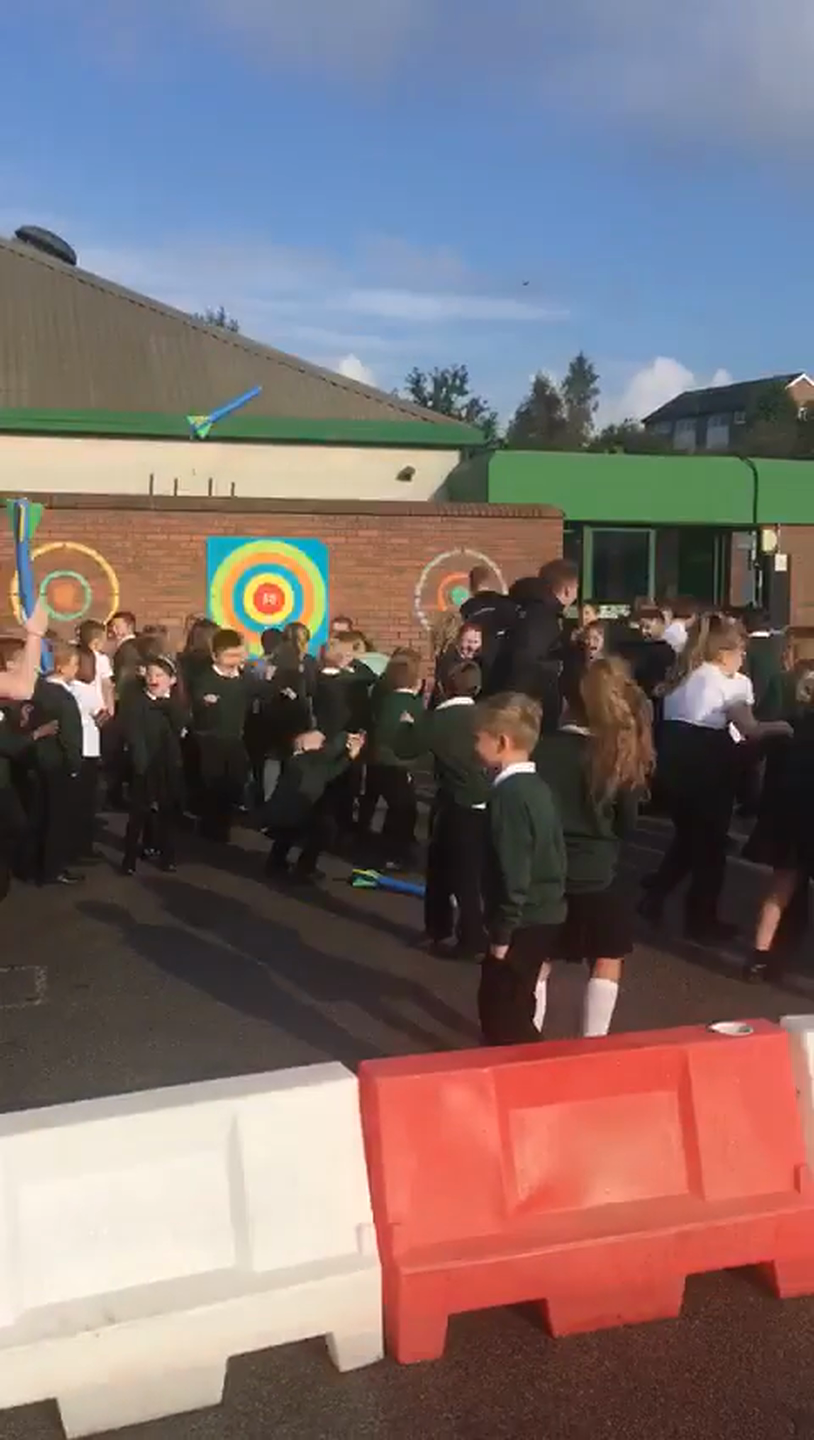 As we come to the end of the half term, we are all really hoping that the time machine can get fixed in time for the holidays so we can have a break at home! We thought about everything we have done and learnt this half term (we realised there was a LOT) and we completed a big Burn 2 Learn where we looked at things we had learnt and whether we did them in the Stone Age, Bronze Age or Iron Age.

We then decided to write a letter back home to someone in 2020. We had an extra challenge to get as many of the special words Mr Cooper had put on the board into our letters. We used humour and a really chatty, informal tone to our letters which made them sound amazing! 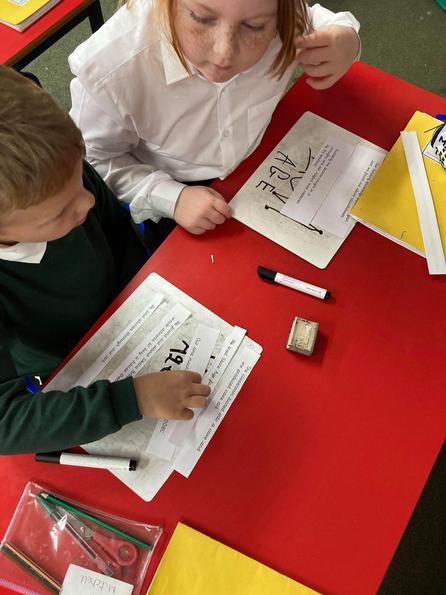 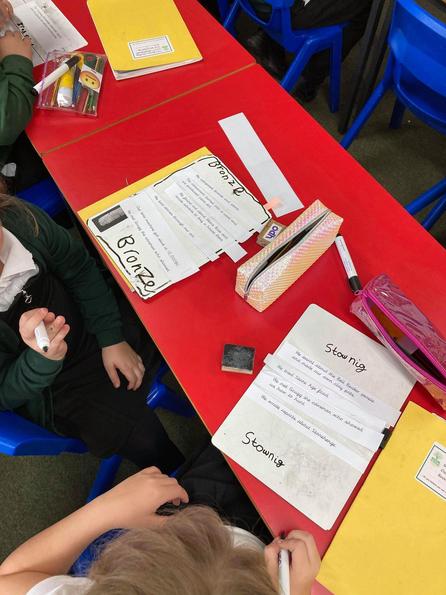 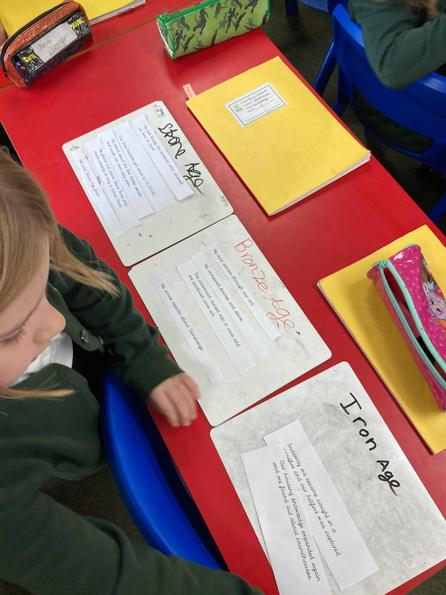 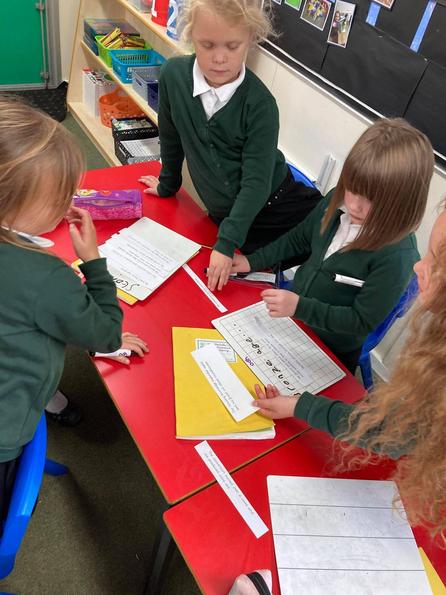 We began our final week of our adventure learning about jobs people would do in the hill fort. The time machine doesn’t look like it will be getting fixed anytime soon so we need to start earning some money. We researched the different jobs and wrote applications to apply for those jobs.

On Thursday afternoon, we then imagine weed as our job applications had been received and we’d been shortlisted for interviews. We acted out the interviews with our partner and one person made notes whilst the other answered the questions. Most of the class got jobs in the end!

We have also learnt about Iron Age food this week. In DT, we did some cooking and followed some recipes to make Iron Age oatcakes. On our final day of the half term, all of the classes will try each other’s food!!

It has been a wonderful half term of learning and fun in Mulberry. But as we get closer to the holidays, we’ve all been hoping we can get back home to 2020 in time. Mr Cooper and Mrs Wilson packed all of the things we’ve done this half term up into boxes and we all got back into the time machine to take all of our learning back with us to show everyone at school and home! The time machine seemed to be working again and we were welcomed back to 2020 with ‘Savage Love’ and a TikTok dance - it sure was good to be home!
Top