Autumn 1 - Changes through the Ages

1. We came back to school very excited to start in our new class! We wrote recounts all about what we’d been up to in the summer holidays.

2. The next day, Miss Martin said that she’d found a recount that did not have a name on it. When she asked who it belonged to no one claimed it! So she read it to the class and it was a recount about visiting Stonehenge which none of us had ever been to! It turned out that it belonged to a brother and sister named Greg and Eve.

3. We wanted to find out more about Stonehenge so we looked at where it was in the country and how long it would take for us to get there.

4. Greg and Eve suggested that we made leaflets for Stonehenge, so we needed to do our research first! We created mind maps to write down everything we could find about Stonehenge.

5. We then created our very own leaflets! We started by looking at some real examples to help us decide how we wanted ours to look.

6. We made sure that we included capital letters, full stops and commas in a list. We also used persuasive language to encourage people to visit.

7. Greg and Eve decided they wanted to take us there! We explored Stonehenge and wrote some very detailed diaries. Whilst we were there something CRAZY happened! We ended up travelling back in time!

8. We quickly became worried as we noticed that Stonehenge had disappeared! We were stood in an empty field. Then Greg and Eve noticed something in the distance. We met another brother and sister called Grug and Ugger. They told us we were in the Stone Age!

9. They wanted to know about where we’d come from. So we showed them items from our time. We discussed how we couldn’t possibly show them everything so these were only clues about our lives.

10. Grug and Ugger then showed us items that they used. This provided us with clues about the Stone Age people used to live. We were really impressed with their creations!

11. Grug and Ugger told us that they loved to draw. They took us on a tour around the caves and we saw some beautiful art work.

12. People in the Stone Age could not read or write so this is how they communicated their daily lives. We had a go at leaving a message only through pictures and found it very tricky!

13. We then looked at how different pictures and symbols are used within the Christian religion as these also provide different messages. We then created our own beautiful stain glass windows using these symbols. 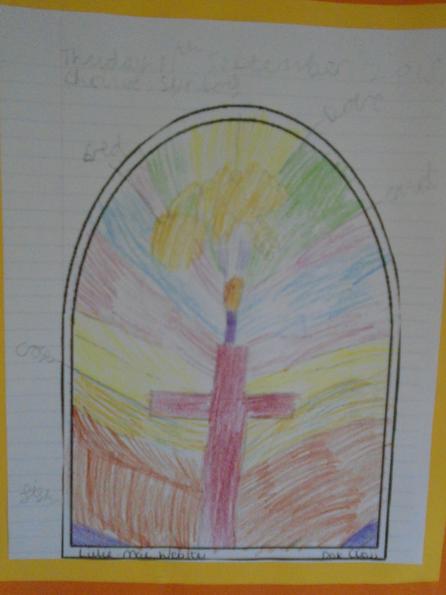 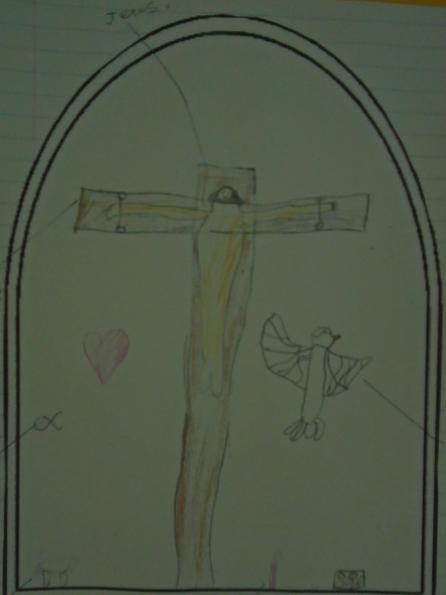 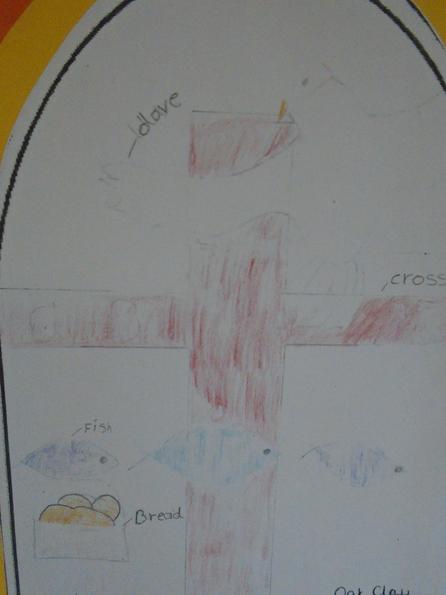 14. Next we had a try at creating our own cave pictures! It was really tricky to draw on to the rocky surface. We made sure that we only used the colours that they were able to make from grinding rocks.

15. Grug and Ugger then took us to a new village in the Orkney Islands called Skara Brae. This village was built so brilliantly 5000 years ago that it can still be seen today! They took us on a tour and asked us to create a house advert as one came up for sale as we were there! 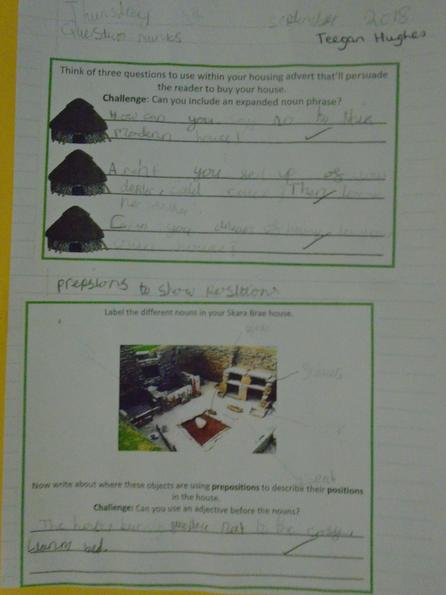 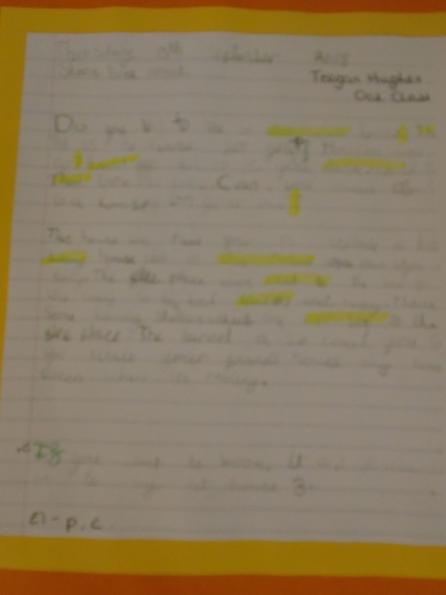 16.We drew up plans of the exterior and interior and made sure that we included questions to hook the reader and prepositions to describe where things were in the house.

17. We then settled down in the house and told Stone Age stories around the fire.

18.Grug and Ugger told us that towards the end of the Stone Age, people started to settle in villages and set up farms. From this new foods were harvested and produced. We looked at the differences of their diet to our own. It was great fun tasting the Stone Age food!

19.We then used lots of new and exciting adjectives to describe the Stone Age food and created a Stone Age menu.

20. As we sat and ate our food, we thought back to how much life had changed from the start of the Stone Age living in the caves and then settling down on the farms. We wanted to compare the differences and wrote two fantastic setting descriptions using lots of adjectives and expanded noun phrases. 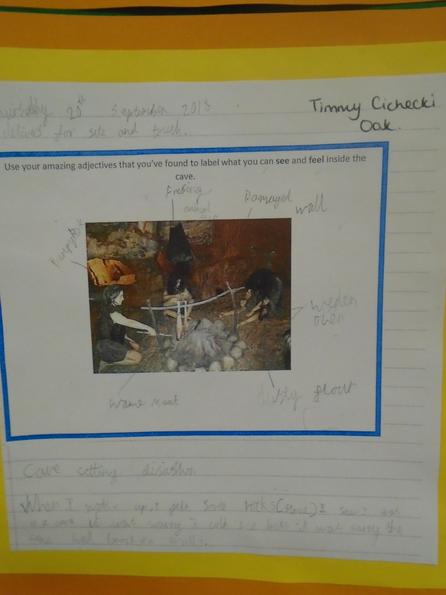 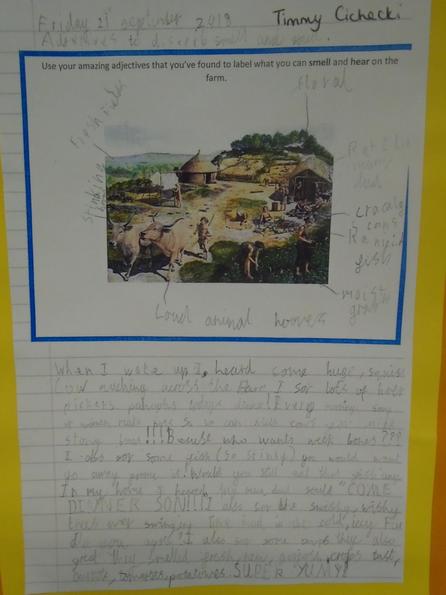 21. As we finished writing our setting descriptions, we noticed in the distance people dragging across huge stones! Then we realised they were building Stonehenge! Grug and Ugger had no idea what this was, but we recognised it! We must be at the start of the Bronze Age. We researched into the history of Stonehenge with Grug and Ugger to find out how it was built, why it was built and what it was used for.

22. We used our research to write fantastic non-chronological reports that include fronted adverbials and conjunctions. 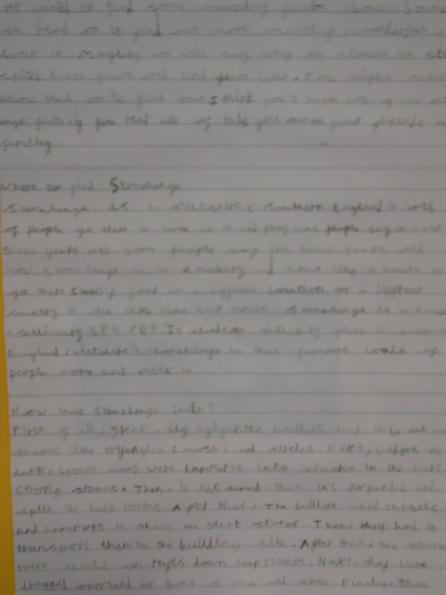 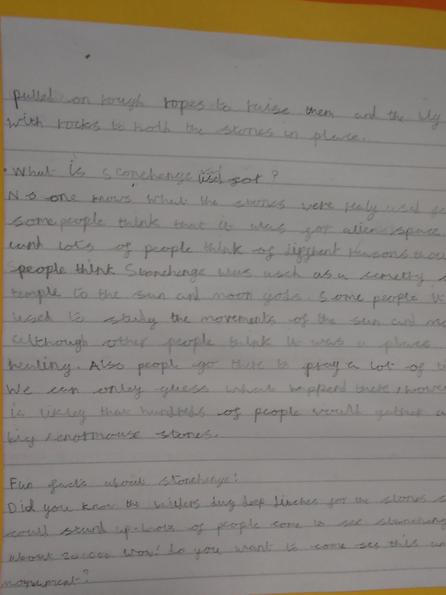 23. After finding out all about Stonehenge we wanted to have a try at creating our own mini versions! We had great fun using salt dough and it made us feel like the giants told in one of the legends of Stonehenge.

24. After making our own mini Stonehenge we thought it would be a good idea to compare the materials that would have been used during the Bronze Age. We looked at how strong they are and what they were used for.

25. Whilst looking at the different materials we stumbled across a mysterious grave. Wondering what could be buried there we thought of some questions so that we could interview the archaeologist who discovered it and put what he said into quotes. We learnt that the body found had been given the name the Amesbury Archer.

26. With our quotes we decided to make our very own newspaper article. We included facts about the Amesbury Archer and how he was found and used inverted commas for our quotes.

27. From our knowledge of the different materials used in the Bronze Age we wanted to make a bell beaker out of clay so we designed and created our own!

28. After making our own beaker we wanted to write some step-by-step instructions so that other people could do the same.

29. Once the clay bell beakers were dry we evaluated our work. We included the equipment used, what we liked about our design and what we could improve on.

30. As the final stone was set to complete Stonehenge we sat and watched the shining sun set with Grug and Ugger and it was magical. Then, something amazing happened! We seemed to be going forward in time and the next thing we knew we landed in a roundhouse, only this time we were on top of a hill. We met Helga and Bork and they told us this was a hillfort and this was where they lived. They told us we were now in the Iron Age.

31. After learning about hillforts and roundhouses we labelled the different features that we could see within a roundhouse and what they were made of. We learnt all about the wattle and daub used to make the roundhouse and also about how the hill protected them from other tribes because they could see them coming.

32. Whilst we were learning all about where Helga and Bork lived they noticed our bell beaker pots and seemed very interested. They were so intrigued by our creations they wanted us to write an advertisement to sell them, including lots of expanded noun phrases and uses for our pots. 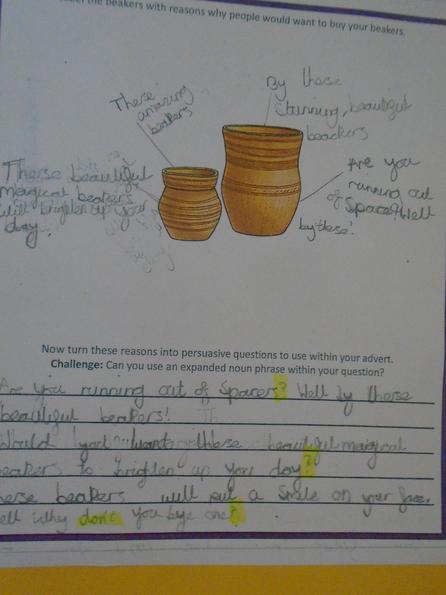 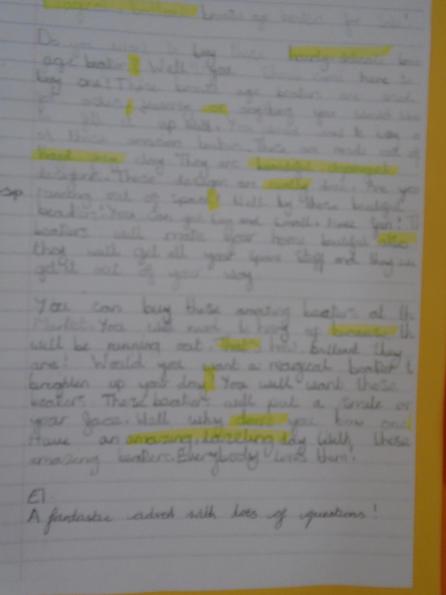 33. We were skipping around the hillfort with Helga and Bork, looking at all the different things people were using our pots for. Suddenly, we heard painfully loud shouting coming from one of the roundhouses. We were under attack! You can read all about what happened in our diary entry. 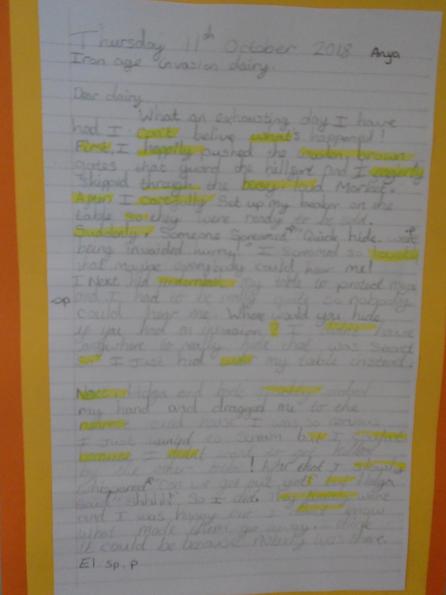 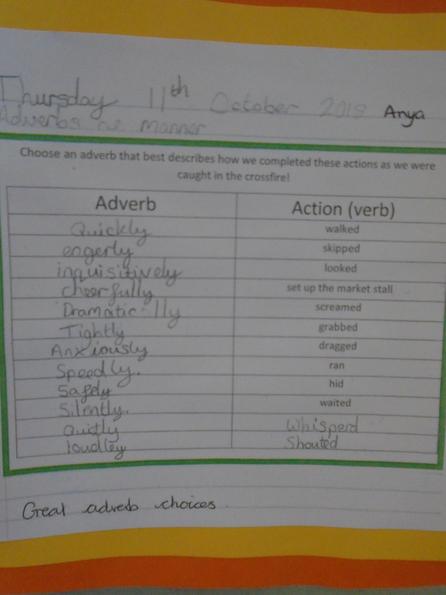 34. When everything calmed down we wanted to know about the different jobs that people had during the Iron Age so Helga and Bork showed us. 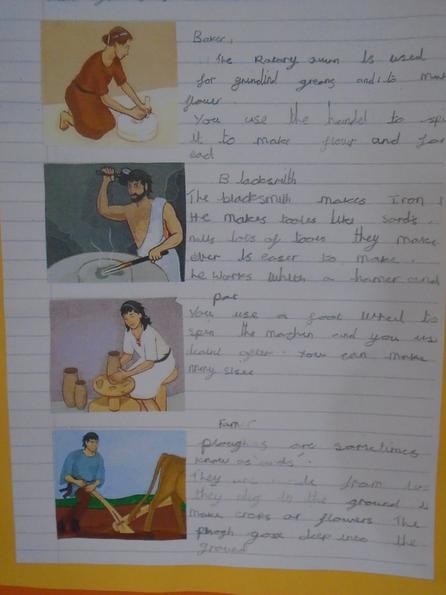 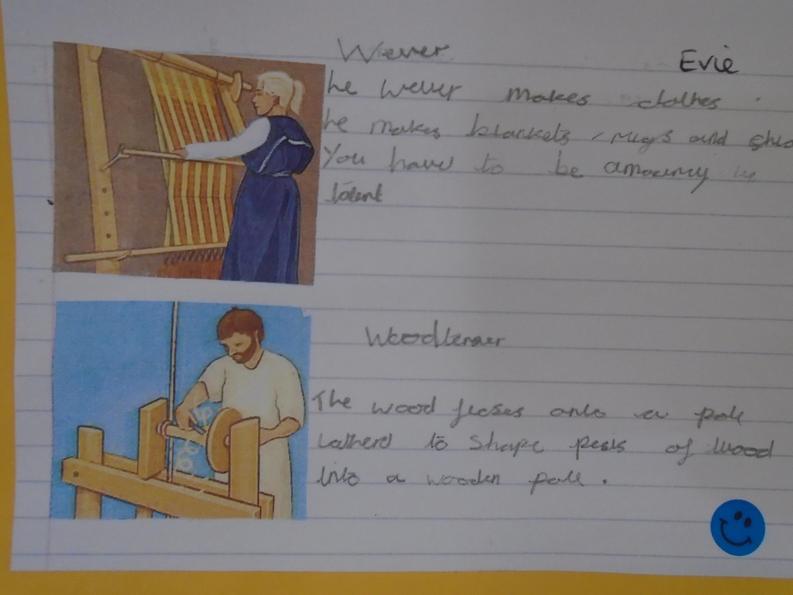 35. As we were walking through the hillfort we thought it would be a good idea to make some posters to advertise some of these jobs in order to keep the hillfort running smoothly.

36. We then applied for these jobs using commas in a list to show our skills, abilities and previous experiences.

37. Now that we know so much about how people lived in the hillforts we thought it would be a good idea to make some food from this time. We wrote an invitation including fronted adverbials and adjectives to persuade people to come to our banquet.

38. After applying for a job in the Iron Age we put together some interview questions in order to find out who would be suitable for what job. We used question starters to prompt us and then did some role play to act out our interviews.

To finish our adventure, we decided to leave our very own artefacts for archaeologists in the future to find. We made our very own time capsule filled with information about our lives and personal profiles. We had great fun finding the perfect spot to bury our capsule.