A new adventure awaits Blossom class and this time we're becoming pirates! Can we find the hidden treasure scattered upon the mystery island with the help of our new friend Christopher Columbus? Quick, there's riddles to solve and keys to find!

We have our very own pirate ship in our classroom! We have lots of things to play with and love dressing up as pirates! 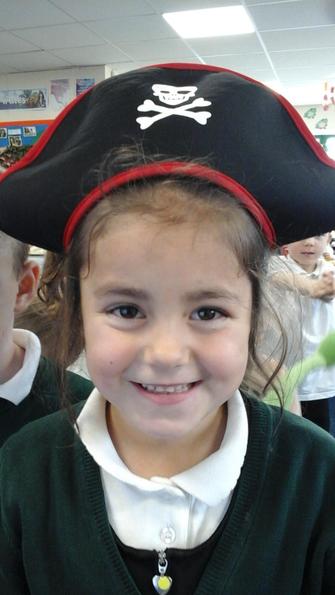 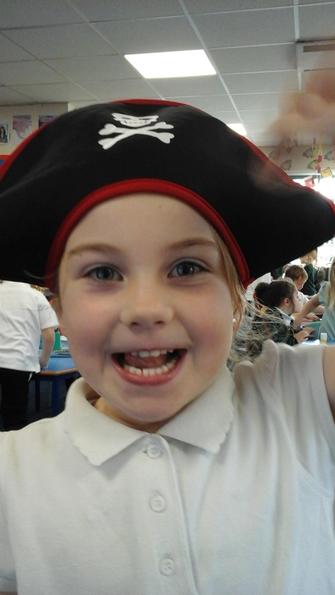 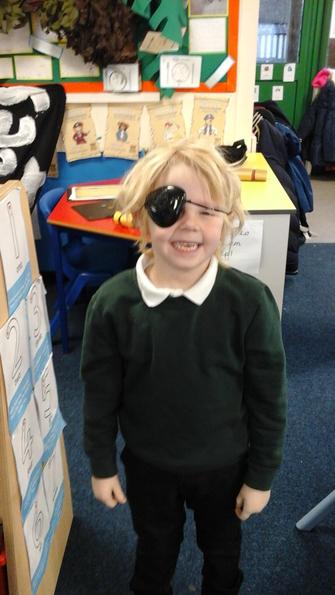 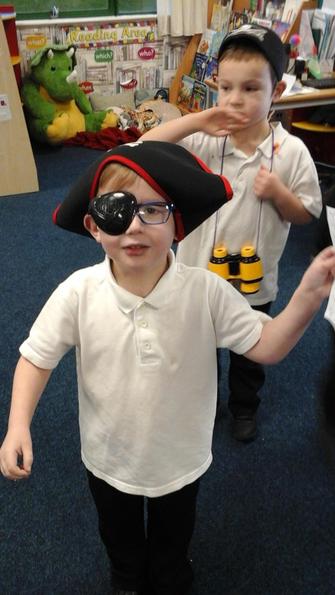 We made our very own pirate ship to help us get into the spirit of things. We had a look at birds, listened to the sea and followed our map to take us to the island! 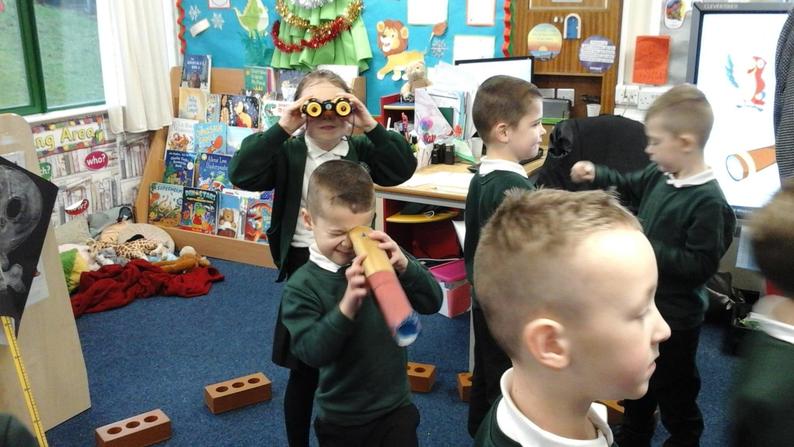 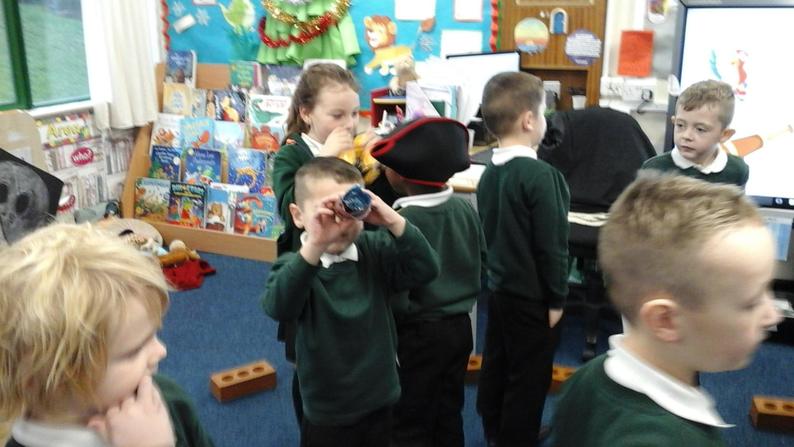 We're on a trip with Christopher Columbus! He has recruited Blossom class to become pirates and help him find the lost treasure on an island. We built our own ship and wrote a letter to our friends Dan and Leo to tell them about how we're feeling on our adventure and everything we saw.
We became pirate newspaper writers for the piratemail. We wanted to get the latest scoop on Christopher Columbus so we interviewed him and asked lots of interesting questions.

We are not proper journalists if we do not write up our findings! We wrote all about Christophers Columbus life, remembering to use adjectives.

We learnt about directions and played a fun game to find out who was going to be the new captain of the ship. 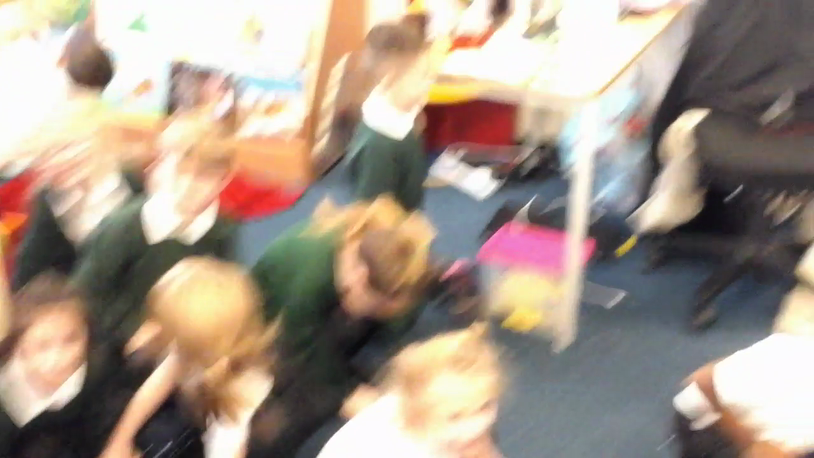 We need the help of the natives on the island if we want to find our treasure! We used Imagineering and thought about what our treasure would look like. We then described it using lots of adjectives!

Pirates love to use maps to help them find treasure, so we decided to create our own! We looked at human and physical features of a map and then split into two groups. One group to make human features and the other to make physical. 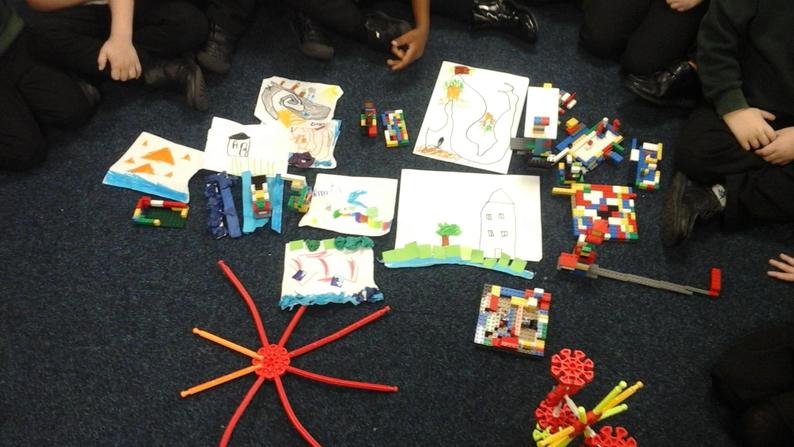 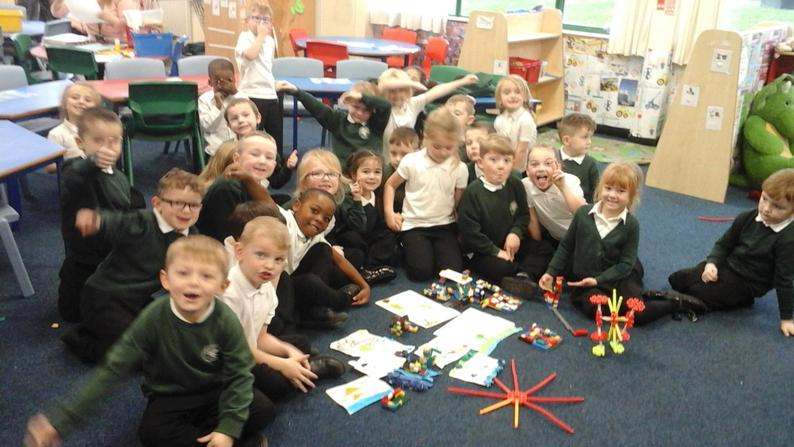 When I Was One

Our song for this half term is 'When I Was One'. We have been having lots of fun singing along and creating our own actions for it!

This week we had a riddle to solve, we found out that our next clue was in the middle of the scary womping willow tree! We tried to describe the tree so that our pirate friends would know what it looked like.
We learnt all about our sense of touch. We were blindfolded and were given an object to feel, then we had to guess what it was using just our hands!

We were so lucky to meet a real native islander! She was called Lacey and because we liked her clothes so much she made us our very own outfits. We then wrote all about it using as many adjectives as we could think of. 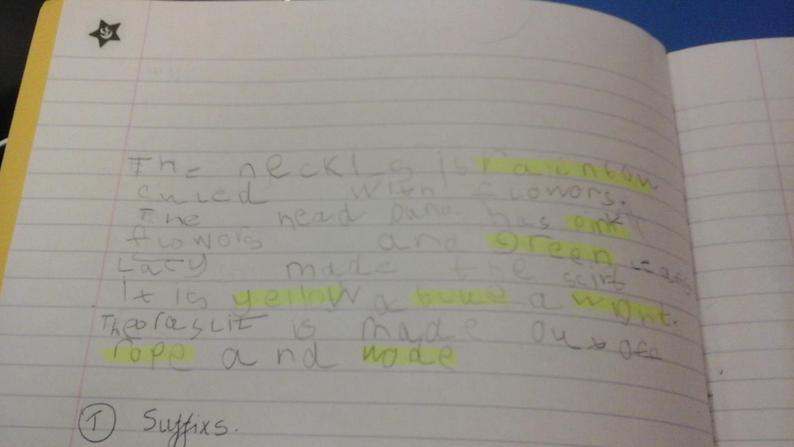 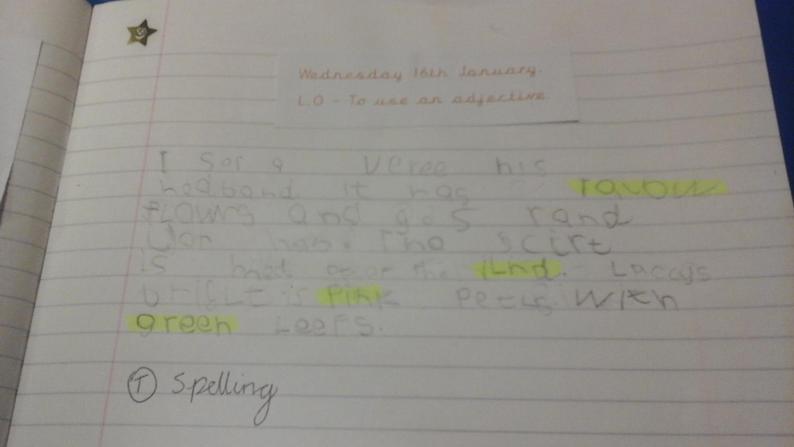 Anne Bonny loved the work of Kandinsky and was going to steal his art to keep for herself! We had to convince her that we could copy his work and make it look just as good and then she can keep that for herself instead. We used paint to colour in our circle pictures. 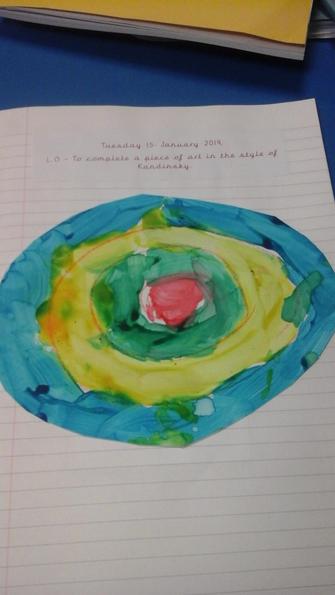 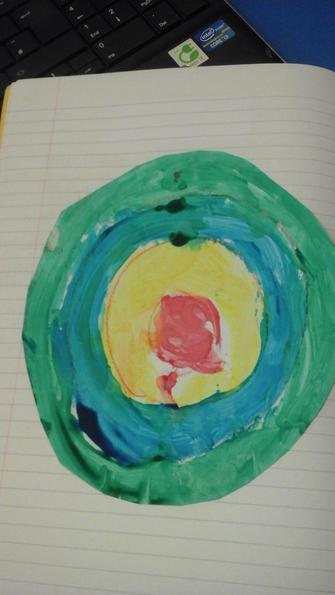 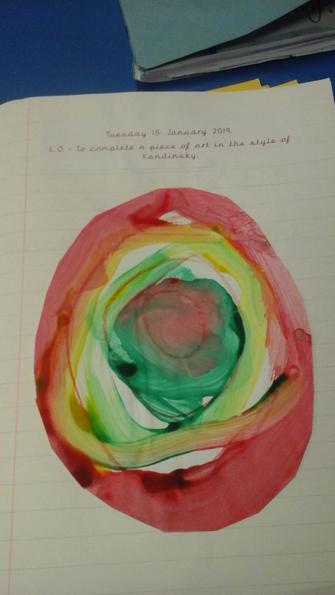 It is our job as pirates to get the clue! To do this we need to make the womping willow fall asleep. We thought up a dance that we could do and then wrote it down as instructions so if anyone else wants to make him go to sleep they know what to do! 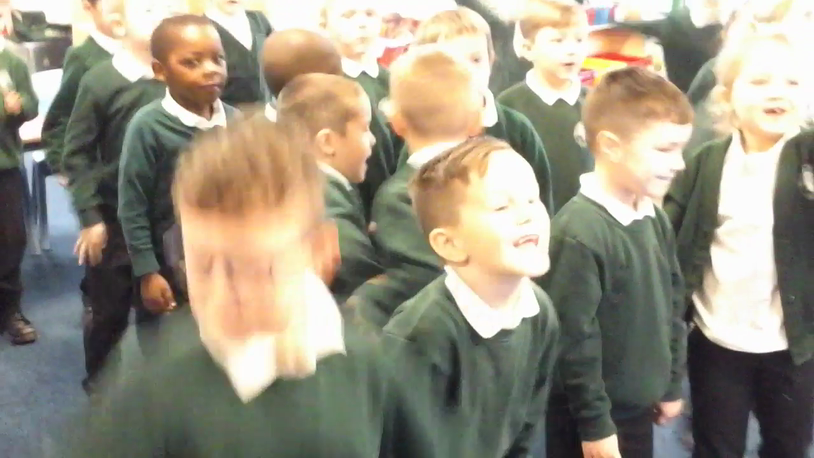 Now we have the clue from the womping willow we need to solve it. This week we are off to meet Peach deep in the sea, she holds the next clue!
We started our adventure by swimming down into the sea, we put on our costumes and arm bands and set off on our trip. We saw lots of amazing things and wrote about it all.
We forgot our goggles for our trip down into the sea so need to make some! We tested lots of different materials to see which the best one would be, seeing which would be the easiest to see through.

When we went back swimming to see Peach we got stuck in a fishermans net! We had to quickly escape or we would be turned into fish fingers! 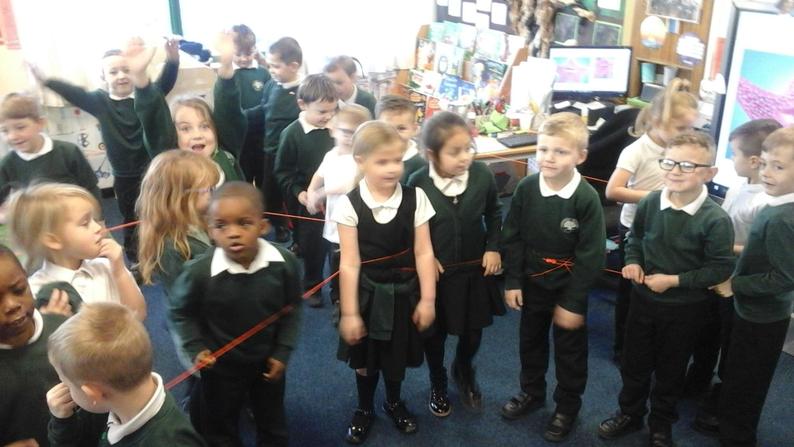 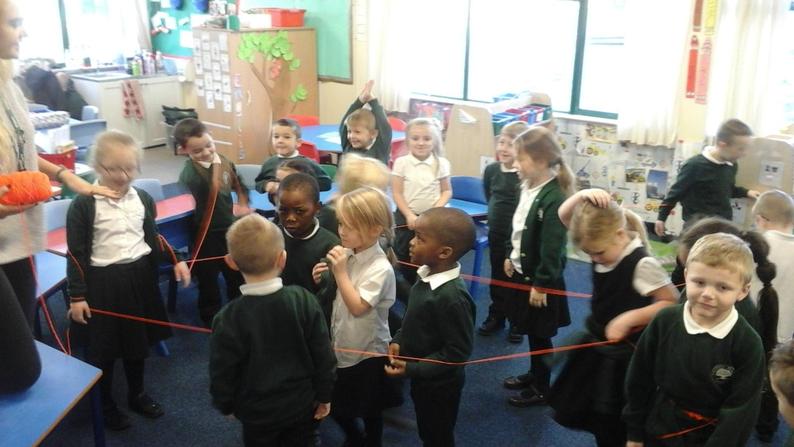 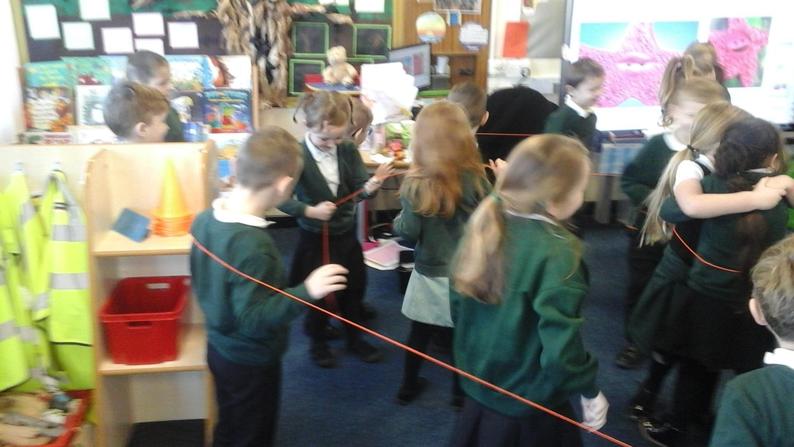 We learnt all about the compass directions this week. We had to guide our friends as to where their partner was standing - but they were blindfolded and we could only tell them using north, south, east or west!
Being the pirates that we are, we decided to write a poem using super sentences. We learnt all about rhyming.
Our friend Anne Bonny was a very famous p[irate. Christopher Columbus played a silly trick on us and mixed up lots of different facts about her and even added in a few untrue ones! It was our job to sort them out properly.
We were off to a maze! We had to get to the middle of it by using our sense of hearing, for there was a song playing in the middle. We created the maze in the hall and then we described everything we saw.

We learnt all about belonging in a community. We looked at how we belonged to the pirate community but also Westwood primary school. We then talked about clubs we were in and how we felt when we were there.

We have reached the end of our adventure and need to think of a way to put the magic beast to sleep so that we can steal the treasure from him! We thought that we should make a potion. We used mermaid tears, starfish juice, smelly punch and unicorn breath! 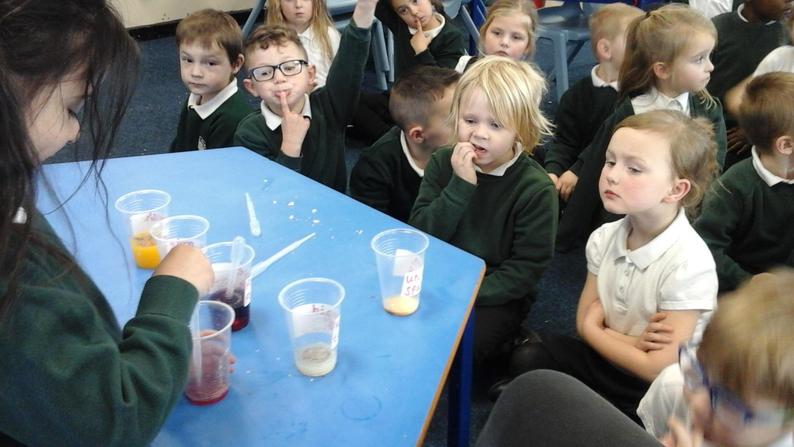 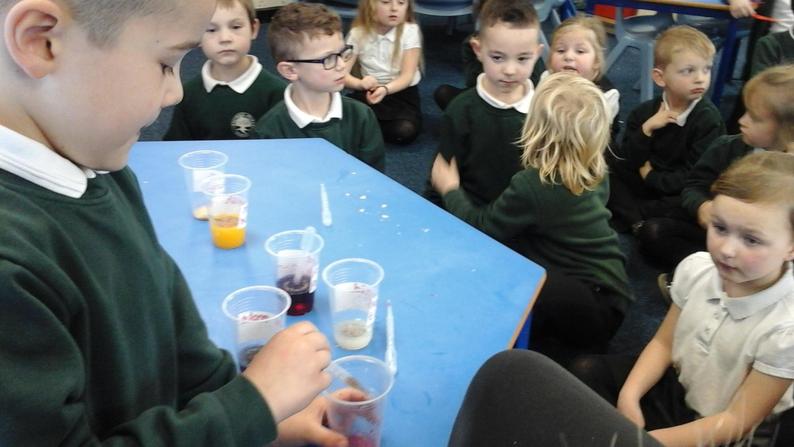 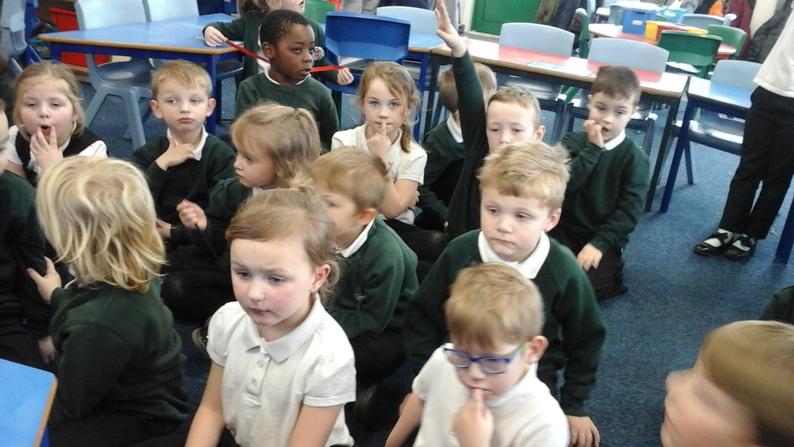 We wanted to make our very own treasure chest. First of all we coloured a template in as neat as we could and then we cut it out. Using art straws we made a slider so our chest could open and shut!