The children have really enjoyed our adventure this term. It all started off with the children receiving a visit from a witch called Winnee. She was very nice and told us all about her town called, Cats Whiskers. She then took us on a very exciting tour of her town, where we visited her Gingerbread house and potion lab.

We thoroughly enjoyed making a range of potions throughout the weeks in Winnee’s potion lab and we met many different people in there. Firstly, we met the Funny bones family, who desperately needed Winnee’s help to put their dog back together again. Then we went Meg and Mog, Meg was very upset as she had fallen out of bed and forgotten how to fly her broomstick. Winnee taught us all how to fly again but Meg kept forgetting so we helped by writing her some instructions on her magic invisible paper, as Winnie had to go teach potions to the Nursery children.

Winnee then had the best surprise of her life, the best costumer ever walked into her potion lab, it was Santa Clause. He told Winnee that his biggest and only toy machine had stopped working and he really needed her help to fix it. He asked Winnee to go to the North Pole so she could fix it properly, Winnee agreed to go with Santa but she had a problem! Winnee had never been to the North Pole before and didn’t know what it would be like, so we helped her pack her suitcase and also joined her on her trip by getting a plane from Leeds Bradford Airport.

Winnee, unfortunately got stuck in a snow storm and got lost in the North Pole but luckily she met a friendly penguin who told her to search for a Polar bear named Percy, who would take her to Santa’s workshop. In no time at all, Winnee had found Percy and was taken to Santa’s workshop, where she mixed by a range of her potions from her bag to master together a spectacular spell. With a puff of smoke the machine was fixed, Santa Clause was so happy but worried that he would still not make Christmas day because he still had so many presents to make and wrap. So Reception offered to help with Winnee, along with Santa and the elves. 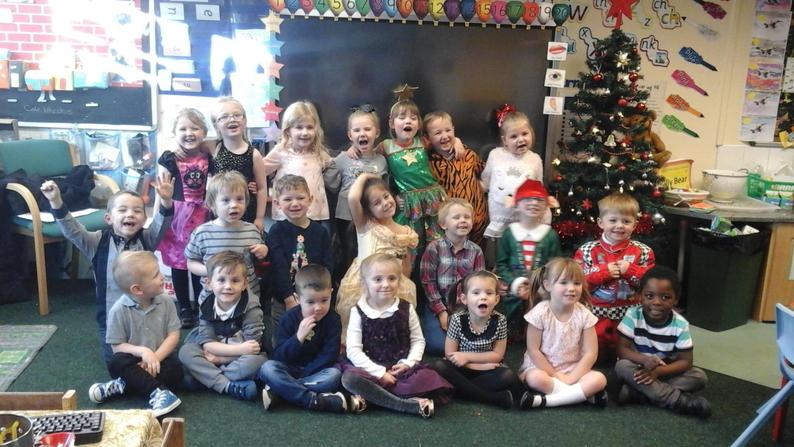 Thankfully when Christmas Eve soon arrived, with the help from Reception, their parents and Winnee, Santa was in his sleigh ready to deliver all the presents to all the homes around the world!